Happy what? For my less nerdy readers: today we celebrate the amazing number π=3.14159… Of course its holiday must fall on the 14th of March, 3/14 in American notation. By the way, on the 22nd of July (7/22) we observe the Pi Approximation Day, because even though π cannot be written as any fraction, it can be approximated by 22/7.

I’m sure you’ve heard so much about pi that you’re sick of it, so I’ll spare you the standard pi(e)-story.  To be honest, this number is exciting and still quite mysterious, but also a bit overrated. There’re so many other numbers out there that deserve attention as well!

Thus today instead of listing all interesting facts about pi, I’d like you to calculate this constant yourself. Or rather approximate it, since its decimal expansion is infinite. There exist a few approaches to this problem, so let’s get started!

Method 2: use an infinite series. 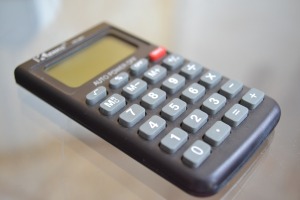 One of the reasons why π is so interesting is that it occurs in many infinite series. They’re just sums of numbers that go forever. For example, 1+2+3+4+5+… is an infinite series. Or sin(1/2)+sin(1/3)+sin(1/4)+… Some series just “sum up” to infinity, which isn’t too exciting. However, for some of them we can prove that they converge to some finite number – even though we cannot just sum their elements.

Gottfried Wilhelm Leibniz, a German mathematician, proved that  π/4=1/1-1/3+1/5-1/7+1/9-… Well, you get the idea. So take your calculator and start adding and subtracting consecutive fractions with ones in numerators and consecutive odd numbers in denominators. The more numbers you add and subtract, the better your approximation will be. When you get too tired, multiply your result by four and enjoy your own approximation of pi!

Warning: when I say that you need a lot of elements of this sum, I really mean it. This sum converges very slowly, so if you stop after first twenty numbers, your approximation will be rubbish. Life’s hard, sorry!

Method 3: use an infinite product.

Similarly as series, we can define infinite products, which sometimes also converge. My favourite product was proposed by John Wallis, an English mathematician. I still remember how excited I got in my first year of university, when my favourite analysis professor proved that π/2=2/1×2/3×4/3×4/5×6/5×8/7×8/9×…Isn’t it cool? Take your calculator again and start multiplying fractions following this pattern. You can see that the numerators form a sequence: 2,2,4,4,6,6,8,8,10,10,… and denominators: 1,3,3,5,5,7,7,9,9,11,11,… Again, the more numbers you multiply, the better. When you get your product, multiply it by two and voilà!

Method 4: use the Buffon’s needle problem.

In the 18th century Georges-Louis Leclerc, Comte de Buffon had some needle issues. The floor in his room was made of parallel strips of wood. He dropped a needle on this floor and wanted to know the probability that this needle would lie across a line between two strips. (Yes, mathematicians also deal with important, real-world problems).

I’ll spare you details, but the solution to this problem isn’t difficult – basic high school geometry is sufficient. Try it! If we assume that the needle’s lengths is the same as the distance between two strips, the probability we’re looking for equals 2/π. So if somehow we managed to calculate this probability, then we would get pi by dividing 2 by this probability.

However, we can approximate probabilities by repeating the experiment many times. As many as possible. If you’re a lucky owner of a wooden floor, that’s great. If you’re not, tape measure on the floor will do the trick. The important part is to find an item (or many items) that are as long as the distances between the stripes. It could be needles, matches or even frozen hot-dogs, as suggested by WikiHow. Just make sure the lengths agree.

Now you can start throwing the object on the floor. Hundred times should be enough, but if you can do more, even better. Than divide the number of times your object hits the stripe by the number of trials. So if you had 127 “successes” in 200 tosses, your approximation of pi would equal 2/(127/200), which is about 3.1496.

There exist many other methods of approximating pi – because this constant is really omnipresent. You might think that doing these experiments is pointless, because you can find millions of first digits of pi online. But the famous Chinise proverb says: “Tell me, I’ll forget; Show me, I’ll remember; Involve me, I’ll understand.” I hope you understand now how mathematicians were able to approximate pi long before the computer era.

Enjoy the rest of the Pi Day!

Follow Certain about uncertainty on WordPress.com
The Renaissance Mathematicus

a deep dive into maps, from before print to data visualization

Blog of the UNC Center of Excellence for Eating Disorders

Our World in Data

Professor of Politics and Public Policy, University of Stirling

To estimate, compare, distinguish, discuss, and trace to its principal sources everything

Life Through A Mathematician's Eyes

The study of mathematics is like air or water to our technological society.